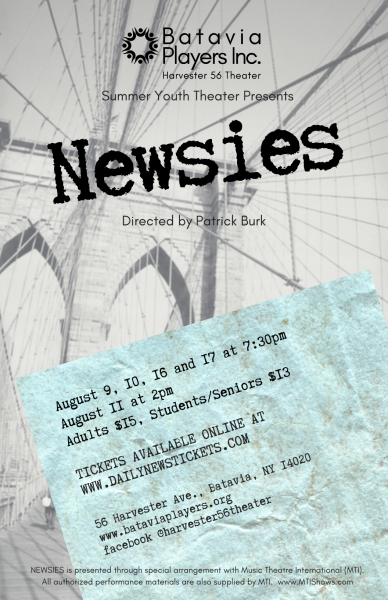 The mission of Batavia Players Inc. is to bring affordable theatre to the community by making theatre accessible to everyone with a variety of quality productions, to enhance artistic growth of participants and encourage audiences to think, feel and develop an appreciation for theatre.


Adapted from the Disney Movie Newsies the Musical, is a major production that looks at the lives, the loves and the day to day struggles of New York City’s famed newsboys during the hay day of newspaper publishing.  Staged during the 1899 real life newsboys strike in New York City, this musical is jam packed with great songs, incredible dances and historical characters.  A tremendous hit on Broadway, this film adaptation is sure to bring a lot of excitement to our Harvester 56 Theater stage.

Share This Event!
When and Where
Harvester 56 Theatre
56 Harvester Avenue
Batavia, NY 14020